Once again in Hungary we are able to buy and plant out in gardens the very popular landrace, organic tomato seedlings which have shown the best results in research by the Research Institute of Organic Agriculture (ÖMKi) and which received a prestigious award at Highlights of Hungary in February this year, and recently, the international scientific journal Diversity published the results of an experiment on them.

The results of a three-year experiment conducted within the framework of ÖMKi’s research into landrace tomato varies were published at the end of April in the scientific journal Diversity. Research carried out in cooperation with the staff of the Hungarian University of Agricultural and Life Sciences between 2015 and 2017 confirmed that the ten domestic tomato landraces studied in organic cultivation, both in poly tunnels and open-field, showed competitive results in terms of both yield and hardiness, when compared with the commercial varieties used as controls (San Marzano, Kecskeméti 549). Among the landrace cultivars requested from the National Center for Biodiversity and Gene Conservation, the continuously growing ‘Fadd’ and ‘Mátrafüred’ varieties showed adequate yields and better resistance against tomato blight than the control cultivars, while among bush tomatoes, ‘Szentlőrinckáta’ showed more ability to withstand early blight (Alternaria solani). Its long growing season and outstanding yield exceeded the results of commercial varieties. The study shows that in organic farming the cultivation of the studied landrace varieties can be recommended both in polytunnel and open-field.

Going organic with the smallest "seedlings"

Over the past two years, adult hobby gardeners have grown these landrace varieties in thousands of small gardens in Hungary, then enjoyed their delicious fruit. Moreover, after the research project received a prestigious award at Highlights of Hungary, many people first heard about landrace tomatoes as one of the prominent results of local organic research. This season, ÖMKi aims to get children involved, to teach them the basics of organic farming. That is why, for the first time this year, landrace tomato seedlings have been offered to the nationwide Ovikert program. Thanks to the gardening “movement” of the youngest generation that has been operating successfully for ten years, so far more than 10,000 children have been involved in the planting and care of thousands of seedlings in 30 kindergartens. With the young gardener’s “method”, kids can experience how delicious and healthy freshly picked, organic vegetables grown in their own garden are. 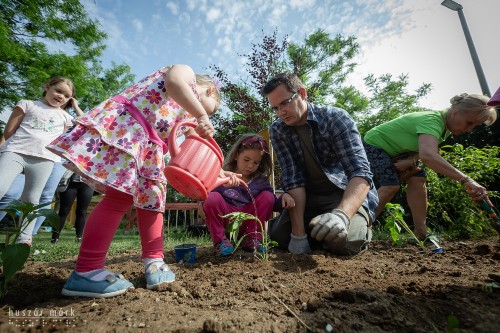 Tamás Stiller, chef and innovator, explains the background of the program: "We are reaching a point where when kids see the garden, what they see is fresh, healthy, local food. Nowadays it isn’t so normal for every house to have a pantry, and keeping a vegetable patch is rather uncommon: people tend instead to either cultivate an ornamental garden or else they simply let the grass grow to waist height." To this, he adds some thought-provoking questions: "If a small child experiences something deeply in the first six years, it might affect his or her whole life. What if it was something healthy? What if vegetables were seen as friends instead of enemies on the plate?”

The Gastrohero Seedlings Program of the Felelős Gasztrohős Alapítvány, (Responsible Gastrohero Foundation) works towards the same goals as the Ovikert Program. The landrace variety tomato seedlings will be donated to kindergarten groups in and around Budapest.

During the early years of landrace tomato research, ÖMKi requested 35 tomato accessions from the Hungarian gene bank, and then the best landrace varieties were selected in cooperation with organic farms and the Hungarian University of Agricultural and Life Sciences. The sale of these seedlings at a commercial level is a huge achievement, and an excellent illustration of the practical application of scientific research, including participatory research.

Dóra Drexler, the director of ÖMKi, expressed her confidence in the program as follows: “Besides scientific research, our goal is to inform society on the importance of organic groceries and locally produced food. With the Ovikert program, we can bring healthy, domestic organic vegetables, not to mention landrace varieties, a little closer to children - and through them to adults as well.”

Where can seedlings be obtained this year?

Last year, shoppers snapped up thousands of seedlings from one of the national supermarket chains in a single day, so this year organizers raised the number of seedlings produced to 20,000. They will be also available at six different locations in Budapest from mid-May, and those who want to be certain of obtaining some can also order landrace varieties online. Consumers who grow their own landrace, organic tomato seedlings are not only looking after their own health, but are also helping to protect the agricultural heritage and environment. At the same time, they are supporting local, sustainable farming, including small producers.

The aim of ÖMKi’s experiments into landrace variety tomatoes was to ensure that the most suitable varieties for organic cultivation would reclaim their place in domestic gardens, so that they could once again be enjoyed for their special richness of colour and shape, as well, of course, as their delicious taste. During the first years of the study, 35 tomato landrace varieties requested from the National Center for Biodiversity and Gene Conservation (NBGK) were examined in 28 cooperating organic farms across the country. From 2015, 10 selected landrace tomato varieties were examined in more detail across three growing seasons, in cooperation with the Hungarian University of Agricultural and Life Sciences. The varieties judged to score highest on the basis of cultivation results, tastings and gastronomic tests were presented in 2017 as part of a seedling adoption campaign. As a result of the great interest and success, they have been sold in a national supermarket chain since 2019, and since last year handover points in Budapest have also been helping to return landrace varieties to gardens.
In parallel with the loss of their genetic diversity, our cultivated crops are becoming increasingly vulnerable to the ever more extreme and unpredictable effects of climate change. Landrace varieties, which are populations created by both natural and human selection, have a level of diversity which allows them to better adapt to changing environments, weather and market needs. They are a source of genetic variation, allowing for a more adaptable, locally acclimatised, sustainable agricultural model that ensures farmers' independence and, no less importantly, enriches our gastronomic opportunities and our everyday meals.

The Ovikert Program was launched in 2012 by chef Tamás Stiller. He wanted to show the rural life he had experienced as a child to today’s children. There was, he observed, little effort to provide pre-school children with quality food, as parents did not see it as a priority. The children, meanwhile, thought that vegetables grew in shops, and chicken came from plastic wrap. What was more, all sense of seasonality had been lost; there were bananas in June and tomatoes in winter. There was no program designed to teach children about the food they ate.

The aim of the Ovikert program is to develop healthy nutrition for pre-school children, thereby helping to shape the attitudes of children, educators and parents. In the Basic Program of Kindergarten Education, special emphasis is placed on education for a healthy lifestyle, one of the cornerstones of which is health-conscious nutrition:

"A healthy lifestyle, body care, bathing, healthy eating habits, including a reduced intake of high-sugar-content food and drink, as well as food high in salt and saturated fats. Encouraging the consumption of fruit and vegetables, as well as dairy products. Encouraging regular toothbrushing, and good habits of dress, rest and disease prevention.” (Basic Program of National Kindergarten Education 2019) 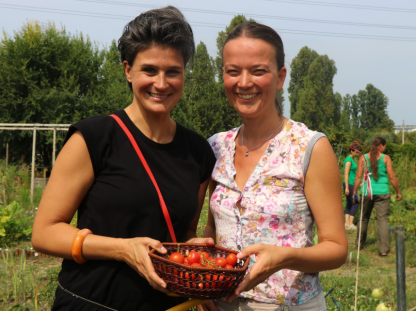 News
Landrace varieties have their place in people’s plates

Rare tomato varieties that have been released from the gene bank were rated as outstanding by one of the most popular Hungarian gastro bloggers. Dóra Havas (author of Lila füge (Purple Fig) foodblog) emphasized the importance of spreading Hungarian landraces during the harvest organized in the “Garden Border” (Kerthatár) Community Garden of the Hungarian Contemporary Architecture Centre (KÉK) 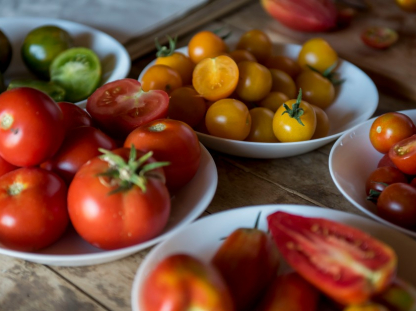 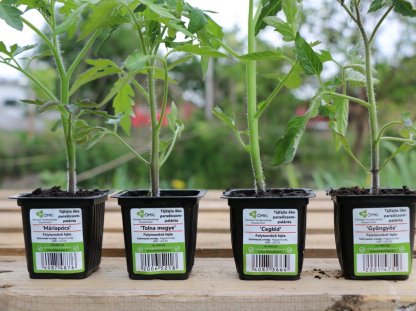